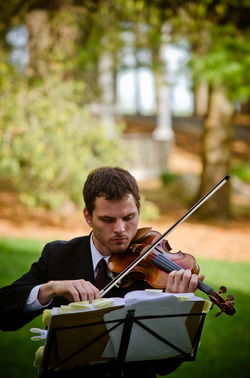 His personal site is loaded tons of free music to download, educational tutorials, and more.


Shawn Boucké began his musical studies in 1997 in the Walled Lake School District on the violin.  His passion for the instrument took off immediately as he began to attend Blue Lake Fine Arts Camp annually.  In 2001 he had the honor of being accepted into the Blue Lake International Youth Orchestra where he performed around Germany, and France.


In 2004 Shawn graduated from Walled Lake Western High School with the National School Orchestra Award from Valerie Palmerie.  He attended Central Michigan University with a scholarship from the music school.  While at CMU he was a section leader of both violin, and viola sections.  As well as attending school Shawn was also a member of the Midland Symphony Orchestra for two seasons.


In 2005 Shawn was hired as a counselor at the MASTA (Michigan chapter of the American String Teachers Association) String Camps.  This is where his love of teaching really blossomed.  He has worked at the camp almost every single summer since then.


Shawn currently is performing at weddings as a violinists/DJ and has a private studio with students from around Oakland County, and the Metro Detroit area.